There are places in Michigan the bravest of brave fear to go.

Places that are not mentioned in public for fear of ridicule!

There was a book published close to decade or so ago by author Richard Kellogg who, at the time, was in his mid 80s came out from one of those protected groups to tell his story.

Richard was tired of telling what HE experienced then laughed at for be being silly and "quite the story teller".

"But this wasn't just a story" he would tell his friends...

"I experienced it all...everything I'm telling you is the truth...so help me God!"

"Come with me and I'll show you where it's at"...He would demand!

And Richard Kellogg did just that!

Richard "showed" people where "it" was "at" through the publishing of his book WALL OF SILVER! 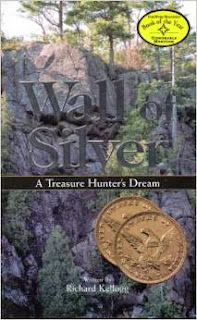 "It" was a lost silver mine with walls of solid silver and gold coins left beneath ground....Coins that were the products of one individual mining the silver in wheelbarrow loads and selling it to organized crime connections in Detroit and Chicago!

When the book was published and released....people still laughed!

They still maintained it was "quite the tale...and imaginative recollection of an aging old bar keep"....

BUT when Michigan Magazine and Forbidden Michigan sat with Richard Kellogg, one on one...face to face....the stories seemed more credible then fiction!

Here's our interview for you to decide!

Tell Forbidden Michigan what you think!

Then tell us if what you hear may excite you to explore for yourself the forbidden area of this alleged lost silver mine with it's walls of silver and bags of gold coins.

It may be just waiting for YOUR touch to reveal it's secrets!

Enjoy the story now as told by Richard Kellogg....and if you'd like to explore more of the details...the book may be purchased below this video!

Posted by Barry Stutesman at 1:42 PM