As we archive the many Michigan Magazine TV segments that have aired since 1989 it's difficult not to get lost in all the memories involved in producing, filming and editing each one!

Each segment takes hours and hours of uninterrupted script writing and video editing and re-editing.

Those hours make it impossible to forget some of the minutest details in the process of bringing each segment to fruition.

The archiving and uploading to YouTube brings wonderful feelings and nostalgic scenes archived in the deep "recesses" of my "mind".

Yup...it takes just a couple seconds of a scene for me to recall and actually feel what was going on back then. They all come rushing back in flurries of emotion.

The people of this state are remarkable. We all know that. The talented people and amazing unexploited communities and heritages along Michigan's backroad can be "mind-blowing".

We hope you'll take the time to peruse our uploaded stories on our You Tube Channel: "spiritofmichigan" (all one word).

In my traveling down memory lane it is impossible to not think about the process of what it took to bring about our Michigan Magazine TV Museum and the historic significance of our accomplishments there!

Even though the museum, as it was is no longer in existence, did provide an amazing connection to our show for the hundreds of thousands that passed through it's doors from 1998 t0 2012.

Dell (Vaughan) and I had been collecting hundreds of gifts and "artifacts" from those we featured on the show since our beginning back in 1989.

Even before the thought of a museum entered our brains our studio was being filled with evidence of past adventures.

The Michiganders we spotlighted were so gracious and thankful that we stopped to consider them as a subject.

What they presented to us were truly gifts from the heart.

We used these "gifts" as props on the set and also to provide studio "B" roll complementing their story.

What to do with our growing collection!

I half halfheartedly threw out the possibility of creating a "museum" similar to what Fred Trost did with his Michigan Outdoors Museum in Bath, Michigan.

It was shortly after that that Dell was on the phone with partner prospects in the venture.

Russ Mason of Rose City was one of our very first sponsors and one of the first to make a concrete proposal.

Russ would build a log lodge directly across from his business which is now "Mason Lumber & Hardware" (Do-It best).

The only stipulation was that he would run his "office operations" in a section of the building...

That sounded wonderful and we were considering it.

Space was the only issue. There was not much acreage for what we were planning

Then the call came through from Comins businessman Simon Yoder

He proposed placing the "museum" on the property directly across from his "Woodworkers" shoppe just south of Comins..The only thing was that he didn't own that property..It was owned for generations by the Elmer and Cecilia Neff family who had no intentions of selling to Simon if he were to exploit the property as a "Model Home" or anything of the sort.

Since the plans involved a "museum that would serve the entire state of Michigan" perhaps the family would have second thoughts.

"Sy" would approach the family again and see if they would consider the sale with the stipulation that it would be "The Michigan Magazine TV Museum" operated by Barry Stutesman and Dell Vaughan.

The plan was eagerly accepted by The Neff family and the sale was finalized.

There is much , much more to the story that perhaps we can get into later on....BUT let it suffice to say that if it weren't for the generosity and talent of Simon Yoder and the amazing fore site of the Elmer and Cecilia Neff Family...The Michigan Magazine Museum would have never become reality

Of course we at Michigan Magazine would agree to reciprocate with underwritership mentions and feature presentations plus promotional events that spotlighted the area...

It would be a win-win situation for everyone involved!

I'm so sorry that I may have lost a few of you....but take heart that I've constrained myself!

One thing I would like to underscore and make sure everyone knows for a fact.

Even though Michigan Magazine Museum no longer exists as it did for nearly 15 years...It is a part of local and state history

We did something that was virtually unheard of in state broadcasting history...

A museum was created for a TV Show. A TV show that spotlighted the true Michigander..off the beaten path...Check out this entry in the book "You Know Your in Michigan When" 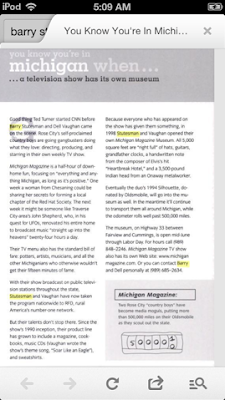 I have only one correction to the above article and that is that "Native America" weighs an astounding 35 Tons....A few thousand more then quoted! :-)

By the way Native America is an amazing story in itself.

(The name Oscoda is Native American:The name is a Henry Schoolcraft neologism thought to be a combination of two Ojibwa words, "ossin" (stone) and "muskoda" (prairie) -- hence 'pebbly prairie.' )

but it also has drawn the attention and deep respect of Michigan Native Americans in surrounding reservations.

We were honored with natives coming from across the state to view the rare releases.

What a surprise it was when we were presented with a special "peace pipe" of brotherhood and thanks.... (Please excuse the wind sounds in this video....We hope you'll appreciate this amazing gesture)

After it's installation "Native America" became the one of the biggest draws to the museum from every corner of our state.

Groups from all walks of life would make pilgrimages to the statue for group shots,meditation and reflection.

Both private vehicles and tour buses would stop by unannounced for photo ops with "Native America".

My ramblings must cease now...I will constrain my thoughts for another blog

I wish for the former Michigan Magazine Museum, now the Skyline Event Center to never forget it's roots and heritage.

When one walks through it's doors for the many events planned, please remember this building remains for everyone to appreciate only through the hard work by volunteers along the way with unending community support...

Please keep the "Spirit of Michigan" alive at this special place... 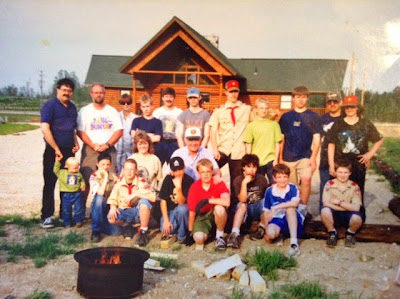 Volunteerism and community support demonstrated by the involvement of local Boy Scout Troops clearing the land...Thank you men! Job well done! Circa 1998

“The past beats inside me like a second heart.” ― John Banville, The Sea 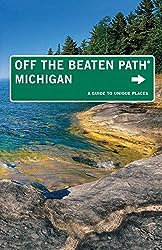 Posted by Barry Stutesman at 11:06 AM